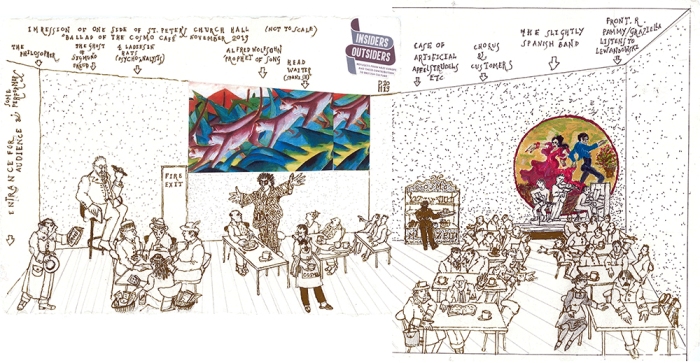 It all started with a drawing. As a student in the late 1950s, and a novice to London’s transport system, Pamela Howard was too nervous to take the bus or tube to her art classes at Slade School of Fine Arts. Instead, she preferred to walk the considerable distance down Finchley Road, and one morning, she noticed a café with its windows steamed up by 8.a.m. When she peered through the glass, she became intrigued by the spectacle that greeted her. Sitting around a table was a group of smartly-dressed women in hats who appeared to be playing cards. A few days later, she plucked up the courage and went inside. A self-confessed “compulsive observer of human life”, she sat quietly in a corner, and brought out her sketch book. Nearby, an elderly man asked her:

“Are you drawing me?”

“No, I’m drawing the women over there. Their costumes fascinate me.”

Hearing an Eastern-European accent, Pamela asked the gentleman where he was from, and how long he had been in London. He replied:

“I’m from Poland. I’ve been here for nearly thirty years, and I can walk from Cricklyvitch to Vimblybush without a hitch.”

It turned out that “Cricklyvitch” meant Cricklewood, and “Vimblybush” meant Wimbledon, and this inventiveness was all part of his charm. At that moment, Pamela thought, “One day I’ll use this.” Now, decades later, with the imminent premiere of her new, original Singspiel, ‘The Ballad of the Cosmo Café’, (with script by Philip Glassborow and original score by music director Brian Hughes), she has succeeded in creating a theatrical and musical evocation of the café and its diverse habitués, including the old man in question, a Polish Catholic artist and émigré called Lewandowski. Their conversation continued:

“Every artist is a student.” 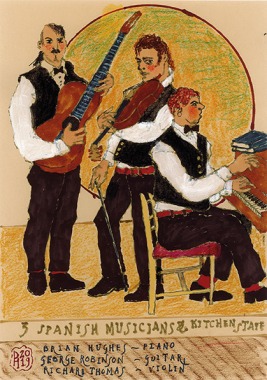 The creation of The Ballad of the Cosmo Café is full of unexpected coincidences and inventions, as Pamela reminisces: “There was a band in the café who played Viennese waltzes, but they always sounded Spanish to me, which I could never understand. I later learned that the musicians were refugees from Franco’s Spain, so it wasn’t just Jewish or Viennese refugees who went there. They played in front of a painting of two flamenco dancers. Our writer, Philip Glassborow, was walking past a junk shop in Winchester, when he spotted a tambourine with that exact painting on it. He bought it for me, and now I have it at home!” 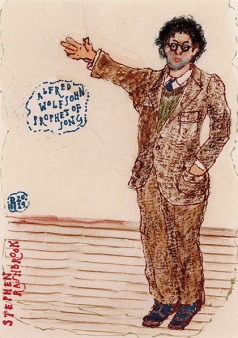 Another character who appears in the performance, and gets his own song, is Alfred Wolfsohn (played by my dad, Stephen Rashbrook), the pioneer of extended vocal technique who fled Nazi Germany, and narrowly escaped death as a stretcher-bearer in World War One. While researching the script for the Cosmo Café, Pamela learned that he, along with many of the Café’s denizens, lived in a housing cooperative in Canfield Gardens, near Finchley Road, whose basic provisions are outlined in the lyrics of a song from the singspiel:

Vienna on a handkerchief.”

The lack of kitchen, Pamela explains, was what prompted the opening of the café so early in the morning: “It meant that the residents of the co-op could go there for breakfast, and some, like Alfred Wolfsohn, stayed there for hours. He used to order one cup of coffee, and make it last all day. He would frequently leap up onto a chair, and declare, ‘I am the prophet of song!’, to which, everyone would say, ‘For God’s sake, not this again.’”

When Pamela was invited by Monica Bohm-Duchen to submit an idea for the Insiders/Outsiders Festival  (a year-long celebration celebrating refugees from Nazi Europe and their contribution to British culture), her answer was simple. She knew she wanted to recreate the atmosphere of the Cosmo Café as a Singspiel, reconstructing the café in an old church hall, with the audience sat around tables. For this, Pamela is grateful for the support of the Royal Central School of Speech and Drama, who have provided the use of St Peter’s Church Hall, Belsize Square, as well as the skills of many of its students. Norbert Meyn, who is a Professor at the RCM and Director of Ensemble Émigré, has played a vital role as their Music Consultant, and Pamela has even received support in kind from Muswell Hill-based café, Roni’s Bagel Bakery and Café.

“I was telling my friend about the project and she asked: ‘What are you doing about food in the café?’ I explained, ‘There is no food, it’s only a memory of a lost world,’ to which she said, ‘I think that’s a terrible idea.’ I said, ‘Oh.’ But as a result, a platter of bagels and snacks is being provided on each table for every performance, which I can’t believe.”

Pamela hands me the programme for the production, which opens on November 16th, and is completely sold out for all four performances. On the front is a quote from The Ballad of the Cosmo Cafe:

“Here’s a home from home at the Cosmo,

and the welcome’s warm at the Cosmo,

Where the old familiar aromas

Remind us of home…”